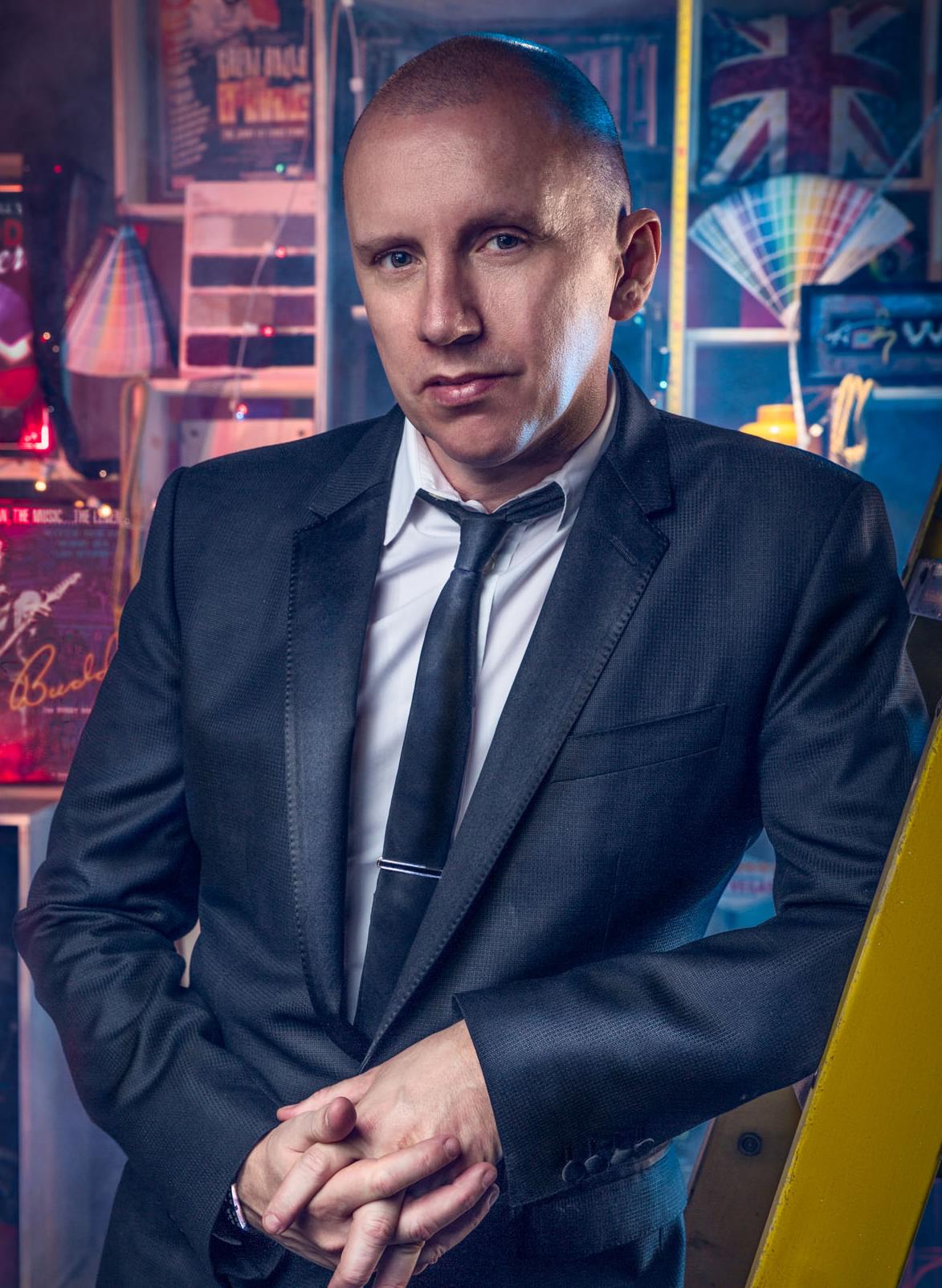 Andy Walmsley grew up 'In a trunk' in a showbiz family in Blackpool the U.K's answer to Las Vegas. He spent his childhood backstage in various Theaters and TV studios, literally sitting in a stroller in the wings watching his parents perform. ( his father was a famous Comedian and his mother performed a Fire eating specialty act) A career in show business was inevitable but Andy was unsure of his direction and pursued various ambitions ranging from professional drummer to Jim Henson puppeteer. A short-lived 'phase' of wanting to become a TV cameraman led Andy directly to set design. Whilst making miniature set models to study the different camera angles and positions, his models improved and eventually he figured why not design the sets instead of shoot them.

A conversation with a family friend, the U.K. magician Paul Daniels, led to Andy being invited to design some props for the illusionist and soon after designed his TV series. A great achievement considering Andy had no training or experience in the field, even more astounding considering his age, just 15.

With a toe dipped in the water his career had begun and while at university studying set design, Andy worked as a stage hand on various operas, ballet and Summer Season spectaculars.

The day after Andy graduated from college he began work as an art director on a Jim Henson project (a strange coincidence considering early Muppeteer ambitions) and then went to work in the legendary BBC television design department. The last term of college had been spent designing both a final college project for Andy's degree and also a Summer Season spectacular for a producer that Andy had worked for as a stage hand. To be designing a major theater show whilst still at college was unusual and the show became a big hit and led on to an unexpected spate of Theater work.

While Andy tried to focus on a TV career the Theater work kept on coming and none so important as 'Buddy, the Buddy Holly Story' a major West End musical with dozens of complicated scene changes and a kid six months out of college designing it.

When it opened, Andy was 21 and was the youngest designer ever to work in the West End - a record still unbroken! 'Buddy' ran in London for 13 years and soon became a huge international hit with a total of 22 duplicate versions running world wide. The show opened on Broadway, an experience Andy found hard to believe, just 18 months out of college.

As a designer of hit musicals, the TV dreams were on hold while Andy designed a string of West End shows and most notably Willy Russell's 'Blood Brothers' which opened in New York marking Andy's second Broadway musical in 2 years.

Eventually the TV producers found out about the kid designing musicals who really wanted to do TV, and finally his TV ambitions were realized. With the theater experience under his belt, Andy now found himself able to bring a fresh look to a jaded TV industry and in a very short time had designed literally dozens of TV Specials, Award Shows, Entertainment Shows for all the major networks and three very prestigious Royal Variety Performances, which included meeting the Queen several times.

Andy had always wanted to design a quiz show but had so far not done so when a phone call came regarding a new show called... 'Who Wants To Be A Millionaire". Andy designed the set in just a few days and three weeks later it had been built. What he had not realized was that the very different set he'd just created would change the visual face of quiz shows forever. The set for 'Millionaire' has been copied to the last detail identically in 108 countries including no less than three versions in the States alone... (As well as the ABC set there is one in both Disney World and Disneyland.) smash movie SLUMDOG MILLIONAIRE heavily features Andy's set and was nominated for ten Oscars.

The 'Millionaire' set is the most duplicated scenic design in history, with 108 identical copies having been built globally.

Andy's work can be seen in every developed country on earth and he has created more than a dozen shows which have been reproduced globally making his set designs more duplicated than any other set designer.

Andy designed the two most expensive sets seen on British television, 'Ice Warriors' and 'The People Versus'. His work on 'Pop Idol' which along with 'Millionaire' are the two most successful UK entertainment shows of the 1990's where considered groundbreaking in terms of design..

Andy had become the most prolific TV designer in the U.K TV industry. When he decided In January 2003 after ten years of threatening to do it , to move to his favorite country The United States. In 2005 he was granted a green card and in 2011 he became a US citizen. . in just 8 short years Andy has designed over 30 TV shows in the states most notably hits.. AMERICAN IDOL, SO YOU THINK YOU CAN DANCE, THE BIGGEST LOSER and AMERICAS GOT TALENT. And he has designed more Las Vegas shows than any other designer ( currently 26 )

Andy is a member of the United Scenic Artists Local 829, I.A.T.S.E. and the Art Directors Guild.

Andy is a multiple Emmy nominee. In 2010 Andy won an Emmy for outstanding art direction for American Idol

No other set designer in history has had designs reproduced internationally so extensively in television shows including : American Idol, So You Think You Can Dance, Americas Got Talent, Brainiest Kids, Winning Lines, The Singing Bee, and notably Who Wants To Be a Millionaire,. Many of these shows have been recreated in over 100 countries world wide. it is worth noting that the shows in question are not merely replayed in various countries but identical sets are built from Andy's original blue prints in all the countries meaning for example that the Millionaire set was built to the last detail 108 times around the world

When it comes to Theater Andy's designs for Buddy the Buddy Holly Story and Blood Brothers have also been reproduced in dozens of countries all over the world for the last 28 years.